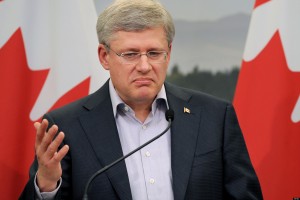 Canada’s Prime Minister Stephen Harper speaks during a press conference at the end of the G8 summit at the Lough Erne resort near Enniskillen in Northern Ireland on June 18, 2013. G8 leaders strongly endorsed calls for a peace conference to be held in Geneva on the Syria conflict “as soon as possible”. AFP PHOTO / BEN STANSALL (Photo credit should read BEN STANSALL/AFP/Getty Images)